‘Sinn Féin hasn’t had this strength since 1918’ – Gerry Adams

Interesting times in Ireland again. Time to truly leave “Civil war politics“ in the South and move on?

On Friday it was the local and European elections in Ireland, Sinn Féin have scored massively in local elections, especially in the cities. They are set to be the largest party in Belfast, Dublin, Derry, Cork city councils. The mixed bag of independents and small parties also scored hugely. Sinn Fein are an island wide party, not the only one, as People Before Profit also are island wide and took seats.

The established political system has been given a massive shake up, with ex TD Joe Higgins on RTE radio calling it nothing short of a “democratic revolution for change”. Present Irish Fine Gael minister, Leo Varadkar went as far as saying he could see Sinn Féin leading the next government, something considered impossible only five years ago. No one was expecting such a sea change, who knows what it might lead to further down the line?

Going back to 1918, we remember what huge changes came from little sparks. As it is not the first time that there has been a huge surge in support for Sinn Fein. Soon after the failed rebellion of 1916, after executions and imprisonment of many Irish rebels, the party grew massively all over the island. They formed their own illegal government and fought a war for Irish freedom, the results of which were the half win of a partitioned island that led to a bloody civil war and the party’s demise. But the world took note; a small island nation stood up to the greatest empire the world had ever seen, the took them on and they forced change. Sinn Fein have done it before, might this weekend be the first step in another chapter in that story?

Another positive aspect is the continued rise of women, immigrant, non-white, LGBT people getting elected, showing that the political make up is better reflecting the true diversiy of the small country (island only has about 5 million). Sad note is how Ireland is STILL the only EU country that does not allow its expats vote, if they did I imagine “Civil war politics” problem would have finished long ago. Another worrying thing is the rise of racism in the county, with Turkish born Muslim candidate Memet Uludag having firstly bacon attached to his election posters and then images of pigs heads stuck to his posters, a common form of attack by mainland European Ultra right / neo-fascists / nazis. The last point of concern for those against the growth of hate / racism / fascism in Europe is the formation in Ireland of NIP, an Irish verion of UKIP. Although small now, no doubt they will grow in Ireland as racism keeps growing, as similar groups have grown in the continent; Hungary, Greece, Denmark, France, Germany, Austria, UK, Sweden and now Ukraine.

Not that the vote in itself will change things, grassroots organized community action makes real change. The 30 years of the war in the north, “The Troubles” has taught many lessons to SF. It will be interesting to see the new chapter in this story unfold, the story of Irish people, the story of a confident people on the island sorting the mess they are in. 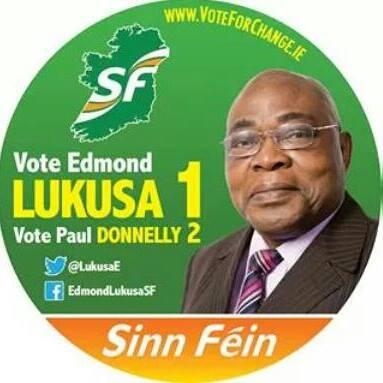 NEWS AND SNIPPETS FROM THE 32 COUNTIES:

SIMILIAR to the trends across the country Sinn Féin and Independents were the big winners in Laois.

– Sinn Fein now have 3 seats in next Mayo

– All change in Leitrim as Independents and Sinn Féin surge

– In Tallaght South Sinn Féin took a massive 51.3% of the total first preference vote. Closest party to them was Labour on 12%

– It’s fitting that as a 32 county alternative PBPA should have our first Cllr of #le14 elected in Belfast. Well done Gerry Carroll.

– Another one of our own, the very hardworking and fantastic LGBT campaigner Janice Boylan elected to Dublin City for Sinn Féin

Front page of todays #Limerick Leader sums up the sucess of the #SinnFein #le14 Campaign in #Limerick @GerryAdamsSF pic.twitter.com/FOWFdohCpz

Lynn Boylan (SF) has reached the quota and is elected as first the Irish MEP in these elections. #ievote #ep14 (POD) pic.twitter.com/EL0aL5aLqi

Independent Brendan Young sending his message loud and clear after he was elected on 12th count in Celbridge #le14 pic.twitter.com/zZ8ISO64Tn

Another one of our own, the very hardworking and fantastic LGBT campaigner Janice Boylan elected to Dublin City for Sinn Féin. #le14

“We want to use our mandate wisely” – Gerry Adams vows to build on election gains (via @thejournal_ie) http://t.co/AuKiVgCZtO #le14 #ee14

‘We’ve been waiting for 100 years for someone to come and save us’ – Ming calls for change in Ireland http://t.co/bvZDWZzHZB #le14 #ee14

Sinn Fein #Tipperary have 5 & 1 for every LEA in Tipp #EveryBladeOfGrass in Tipp now has #TeamSF Councillors #le14 pic.twitter.com/8DQanJEDAK

Check out the vote Sinn Féin took in Tallaght South, Dublin South County! 51.3%! Miles ahead of any other party #le14 pic.twitter.com/BuRTETh432

Here's what Joe Higgins has to say about #le14 http://t.co/r9OeoTsko0

Cabra-Finglas only had 18% women candidates but women have taken 30% of the seats. #LE14 #LE14Women

ANALYSIS: It's only now that the government gets just how angry voters are http://t.co/THHJS37CYM #le14

A massive step for feminsim, a truer, more equal form of democracy…

On this day in 1918 Constance Markievicz became the first woman elected to British Parliament pic.twitter.com/4OkQ0jyRqV