“The day the political landscape changed forever“, was how Fritjof Capra referred to events of N30, Tuesday 30th of November 1999, in his book The Hidden Connections. He was referring to the day when 1000´s of global justice activists came together and succeeded in shutting down the first WTO talks in the US using (mostly) non violent direct actions (NVDA) in the north western US city of Seattle. This was the event which brought the “globalisation” debate to the mainstream. It has been misleadingly described as anti-globalisation, what it should be accurately described as is anti corporate globalisation.

Another very well respected ecologist, Paul Hawken, participated in the lead up before this day and in the actions on the day itself and then wrote an article about his experiences entitled, N30 What Skeleton Woman Told the WTO in Seattle in which he stated:

“When I was able to open my eyes, I saw lying next to me a young man, 19, maybe 20 at the oldest. He was in shock, twitching and shivering uncontrollably from being tear-gassed and pepper-sprayed at close range. His burned eyes were tightly closed, and he was panting irregularly. Then he passed out. He went from excruciating pain to unconsciousness on a sidewalk wet from the water that a medic had poured over him to flush his eyes — like a young boy in bed.

Police said that they were not prepared for the level of violence, but in fact they were unprepared for a network of non-violent protestors totally committed to one task — shutting down the WTO.

If the world could vote on the WTO, would it pass? Not one country of the 135-member states of the WTO has held a plebiscite to see if their people support this concept.”

A thing born once in Seattle amidst tear gas and protest…

Many things grew out of those days in Seattle, one of them has grown from strength to strength and is perhaps the best metaphor like tool we can use to understand the new ways of doing things: Networking, building up and using efficient, open and honest tools of communication: Indymedia. The bi lingual film “i“ or ”Eye of the storm”, made by IMC-Argentina, is a beautiful film which shows the birth and growth and magic of “a global network” . It focuses on the rise of Indymedia and how participative media grew during the economic and social crisis in Argentina. (also viewable on ClipShack and Dailymotion)

A second film “Globalisation and the media“, made by Undercurrents, focuses on the reasons behind the construction of the open source participative media platform that is Indymedia and its effectiveness in giving “passionate and honest tellings of truth”. The film also shows the Italian states vicious attack of the Italian IMC centre during the G8 protests in Genoa 2002

From the streets to big screen

The story of the Seattle protests has now been turned into a fictionalized film featuring some of Hollywood’s biggest stars; Battle of Seattle. The film´s writer and director is Irish actor Stuart Townsend and due to this the world premiere happened in Ireland in February this year. A full review was written on IMC-IE; Battle in Seattle- Anti-Capititalism on the Big Screen which concluded: Is this film worth going to see? Definitely. 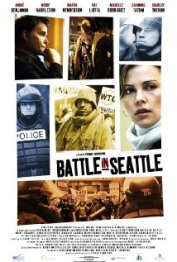 On the days leading up to its US premiere, Democracy Now! spoke to Stuart Townsend, as well as David Solnit, one of the key organizers of the WTO protests and co-founder of the Seattle WTO People’s History Project found at realbattleinseattle.org, below are just a few of their comments. the film is currently showing in Barcelona and a visit has been organised as part of the GEF 08, the first Global Eco Forum.

DAVID SOLNIT: The concerns were around portrayal of activists, including the Global South movements, which were sort of out inspiration and we were playing catch-up to

DAVID SOLNIT: I think key to it was the fact that there was nine months or a year of grassroots mobilization, and key to that is that there was decades of movement-building leading up to it. And in analyzing what made that shutdown work, some of us have extracted some key elements, which were that there was a clear what and why logic to the shutdown, that there was a huge amount of alliance-building, grassroots organizing, mass organization and mass trainings, and that it was decentralized. There was no one group or leader that could be taken out and stop it.

STUART TOWNSEND: One thing that’s happened is, since Seattle, because of Seattle’s success, you know, it’s very hard now to actually protest, have real dissent, because there’s two-mile exclusion zones.

(Ironically enough, the end comment of pre-emptive strikes against protestors in the US has now extended to journalists and DN! host Amy Goodman and 2 of her team and a host of I-Witness media activists were arrested at the recent Republican Convention)

–This is what Democracy looks like is a report back from Sharma, just one of the many who was on the streets.

–The Streets of Seattle, An audio documentary looking back at the events of Nov 30, 1999. ( Bruderhof Radio & Seattle Indymedia 28mins)

This film, shot by 100 amateur camera operators, tells the story of the enormous street protests in Seattle, Washington in November 1999, against the World Trade Organization summit being held there. Vowing to oppose, among other faults, the WTO’s power to arbitrally overrule nations’ environmental, social and labour policies in favour of unbridled corporate greed, protestors from all around came out in force to make their views known and stop the summit. Against them is a brutal police force and a hostile media as well as the stain of a minority of destructively overzealous comrades. Against all odds, the protesters bravely faced fierce opposition to take back the rightful democratic power that the political and corporate elite of the world is determined to deny the little people.

“The documentary, like the protest, turns Art into Action.” – The Village Voice

The Seattle IMC made their own film after N30 entitled Showdown in Seattle and they should be watched to get a fuller picture. The film has been broken into 5 parts and is stored on Archive.org

The film was realised with help from:

2 thoughts on “N30: The day the political landscape changed forever”

Its A Funny Old World is plenty of things...
Urban Transitions Hub

A tool to facilitate increased citizen participation in the construction of a more inclusive, sustainable and equal city.